Bedwetting (also called nighttime or nocturnal enuresis) is a common childhood problem. Children learn to control daytime urination as they become aware of their bladder filling. Once this occurs, the child then learns to consciously control and coordinate his or her bladder. This generally occurs by four years of age. Nighttime bladder control usually takes longer and is not expected until a child is between five and seven years old.

For most children, bedwetting resolves on its own without treatment. However, parents and children may worry about bedwetting since it is embarrassing and inconvenient. Some parents may also worry about underlying medical problems.

Bedwetting may be related to one or more of the following:

Physical or emotional problems rarely cause bedwetting. Most children with bedwetting do not have an underlying medical problem. Medical problems that may contribute to bedwetting include diabetes, urinary tract infection, fecal soiling (encopresis), pin worms, kidney failure, seizures, and sleep problems (such as sleep apnea). Most of these conditions can be diagnosed easily.

Constipation, a common problem in children, can also cause bedwetting. If your child’s bowel movements are infrequent, you should mention this to your child’s healthcare provider.

The age at which enuresis is considered a “problem” depends on when the child develops bladder control and the perspective of the parents:

For most children, enuresis is a problem when it interferes with their ability to socialize with friends. However, it is understandable for parents to want reassurance that their child’s bedwetting is not caused by an underlying medical problem.

History – Important points for you to mention when discussing bedwetting with a healthcare provider include:

It is also useful to record a 24-hour diary of how much the child drinks and how much urine s/he passes. This includes recording the time and amount of fluids your child drinks, as well as the number of times the child urinates, including the amount urinated, if possible (figure 1).

Urinalysis – Urinalysis is a screening test for underlying medical problems. It requires testing a small sample of a child’s urine. Urinalysis can usually be done in the clinician’s office.

Initial treatment of bedwetting includes education and motivational therapy. Behavioral alarms or medication may be tried if enuresis does not improve with these interventions.

Before beginning treatment, it is important to consider how ready and able your child is to participate in the process. Both you and your child must be motivated. If your child is not mature enough to assume some responsibility for treatment, s/he should not be forced to do so.

Treatment is often prolonged and may involve cycles of success and failure. Treatment should include consistent follow-up with a clinician (approximately every four months).

Parents must understand that bedwetting is completely involuntary and that a child should never be punished for wetting episodes. Spanking and verbal scolding do not improve a child’s ability to stay dry.

When to seek help — You should speak with your child’s healthcare provider if your child has difficulty with needing to urinate frequently or urgently, extreme thirst during the day, burning with urination, swelling in the feet or ankles, or a new problem with bedwetting after weeks or months of being dry. These may be signs of a more serious condition that should be evaluated before any enuresis treatment is attempted.

If your child does NOT have the above problems, you may seek medical advice at any time, or you may try following the general advice or motivational therapy techniques described below. Motivational therapy techniques are best suited to younger children with enuresis. Most clinicians do not suggest alarm devices or medications until a child is at least seven years old.

Self-awakening – Self-awakening therapies aim to teach a child how to recognize when the bladder is full during the daytime, in the hopes that s/he can recognize this feeling during the night. It is most likely to be successful in children over the age of six years.

The child should practice a self-awakening routine before bedtime every night. Have the child lie on the bed, pretend it is the middle of the night, and feel that the bladder is full. Ask the child to imagine that his or her bladder is saying, “Wake up before it’s too late.” The child then goes to the bathroom.

The child should also try to practice self-awakening techniques during the daytime. When s/he feels the urge to go to the bathroom during the daytime, s/he should be told to go to the bedroom and lie on the bed, and pretend he or she is sleeping. Tell the child to lie still while thinking about the bladder being full and needing to get up. After a brief period of time, s/he should get up and go to the bathroom to empty.

If self-awakening does not work, you may awaken the child at least once during the night. Use the smallest amount of prompting possible; progress from turning on a light, saying the child’s name, touching the shoulder or face, gently shaking, or using an alarm. Once awake, the child should get to the bathroom without assistance.

Bedwetting alarms – Enuresis alarms are the most effective method for controlling bedwetting. They are typically reserved for children older than seven years of age. Alarms are not generally used first since they are moderately priced and require the child and parent to be highly motivated. You may consider trying alarm therapy after three to six months of other behavioral training techniques, before treatment with medication.

Alarms work by using a sensor that detects the first drops of urine in the underwear. When the sensor is activated, it sends a signal to an alarm device, which is intended to wake the child with a sound, light, or vibration. A table of available alarms is provided here (table 1). The alarm helps to train the child to wake up or stop urinating before the alarm goes off.

Children should be in charge of their alarm and should test it every night before sleeping. With the sound or vibration in mind, the child should imagine the sequence of events that will occur if the alarm goes off:

Keep a diary of wet and dry nights. Give positive reinforcement for dry nights and for successful use of the alarm sequence.

As alarm therapy begins, some children will not awaken when the alarm goes off. You should wake the child initially, although most children will eventually learn to awaken on their own. It is critical for success of alarm therapy that the child is awake and conscious during the process of going to the bathroom in the middle of the night and not “sleepwalking” through the experience. Use the alarm continuously until the child has three to four weeks of consecutively dry nights. This usually takes three to four months but can range between five weeks and six months. The alarm sequence can be restarted if bedwetting recurs.

Alarm clocks – You may use a simple alarm clock to treat bedwetting. It can be set to awaken the child after two to three hours of sleep, whether or not the child is wet or needs to void. The waking time also can be adjusted by determining the time that the child is most likely to have a wetting episode and setting the alarm before this time.

Desmopressin – Desmopressin, also known as DDAVP, is a medication that decreases urine production. It is available as a pill and is taken at bedtime to reduce the amount of urine made during sleep. It is generally recommended for brief periods (eg, overnight camps or sleepovers), although it can be used on a nightly basis.

Serious side effects with desmopressin are uncommon but can occur if the child drinks too much fluid before bedtime. For this reason, children should not drink more than 8 ounces (240 milliliters) of fluid after 5 p.m. on nights when desmopressin will be used. The child should not drink any fluid beginning one hour before and eight hours after taking desmopressin.

Unfortunately, relapse rates are very high with desmopressin; approximately 60 to 70 percent of children have a return of nocturnal enuresis after stopping the medication. 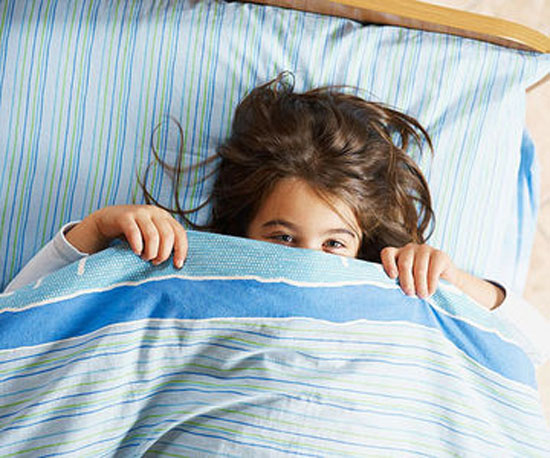